José Neves, founder of Portugal’s first unicorn Farfetch, is nominated for the British prize in the “Business Leader” category, alongside the heads of Gucci, Versace, and Louis Vuitton.

The annual ceremony is the main source of donations for the BFC’s Education Foundation, dedicated to financially supporting students with significant potential in the fashion industry.

This year the ceremony takes place on December 10 at the Royal Albert Hall in London, and the list of nominees for the Fashion Awards have been announced.

Farfetch founder and president Neves is nominated in the “Business Leader” category and is part of a shortlist of candidates for the award that includes the presidents of Gucci, Burberry, and Louis Vuitton and the CEO of Versace.

Born in Guimarães, Neves founded in 2007 the company that would eventually become the first Portuguese unicorn. In September of this year, Farfetch debuted on the New York Stock Exchange, valued at almost five billion euros, “more expensive” than Amazon itself.

With the market capitalization, the company created by the Portuguese entrepreneur positioned itself immediately above $8 billion mark, according to Observador.

In the last decade, Farfetch’s success has not only been measured by its appreciation. The company revolutionized the online luxury fashion trade.

“I was a shoe designer, a boutique owner, a trade show organizer, a real handyman in the fashion world. And I fell in love with this world, I was fascinated by people, by places, by creative chaos,” said Neves in a letter written at the time of the IPO.

Farfetch was created in 2008 close to Porto, Portugal by a Portuguese founder, José Neves. Legally the company is British and they have offices in Braga, Dubai, Guimarães, Hong Kong, L.A., Lisbon, London, Moscow, New York, Porto, Shanghai, São Paulo, and Tokyo. but their genes are all Portuguese. 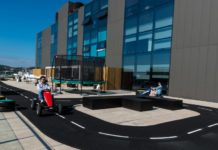