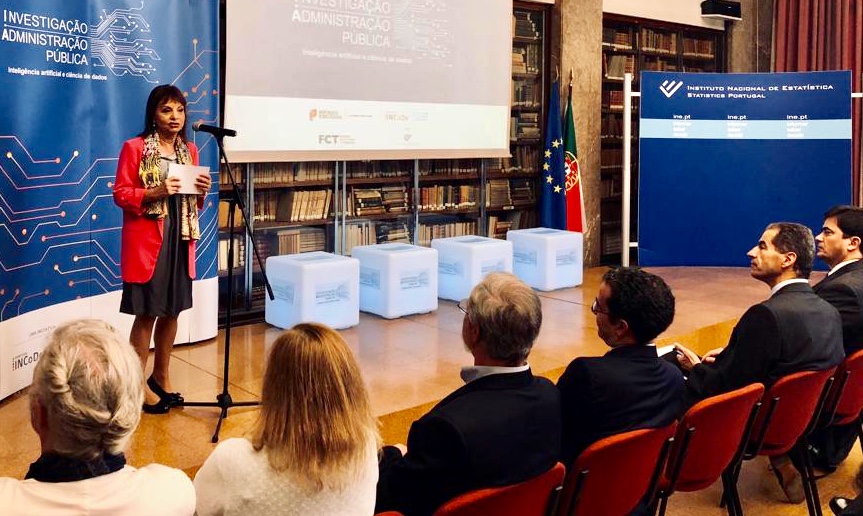 The Portuguese government is backing 15 new AI projects for public services to the tune of €3.8 million.

In Portugal, there are 15 new AI projects that are implementing intelligent algorithms to analyze data from public administrations in order to find hidden information in the areas of health, education, urban mobility and land use planning, so they can come up with solutions in these areas.

The funding of the projects are part of the government’s mission to employ more artificial intelligence in Portuguese public services.

Health, mobility in cities, and education were the three main focuses of the presentation that took place Wednesday at the Instituto Nacional de Estatística in Lisbon.

The following projects aim to promote knowledge linked to innovation and modernization of public services and the development of scientific research, in order to implement public policies for the benefit of citizens.

They are funded by the Foundation for Science and Technology, at €3.8 million, and are the result of cooperation between scientific institutions and Public Administration entities.

1) The project “Use of Artificial Intelligence to enhance the Teledermatological Screening” is developed by the Fraunhofer Portugal Research Association, in partnership with the Administration of Shared Services of the Ministry of Health.

2) The project “Intelligent Water Data System”, of the Polytechnic Institute of Setúbal, has the partnership of the Municipality of Barreiro, the Municipal Water and Sanitation Company of Beja and Infraquinta.

3) The project “Neuroimaging Biomarkers for Diagnosis of Neuropsychiatric Diseases, using Artificial Intelligence,” of the Association for Research and Development of Sciences, has as partners the Fernando da Fonseca Hospital, the Hospital da Senhora da Oliveira, in Guimarães, the Centro Hospitalar Lisboa Norte and the Shared Services of the Ministry of Health.

4) The project “Identification and Prediction of Demand for Hospital Emergencies,” of the Calouste Gulbenkian Foundation, has the partnership of the Shared Services Administration of the Ministry of Health.

5) The “Data2Help: Data Science for Optimization of Emergency Medical Services” project is the responsibility of the Institute of Systems and Computer Engineering, Research and Development in Lisbon and has the partnership of the National Institute of Medical Emergency.

6) The project “Early detection of failures of public transport vehicles in an operating environment” is from the Institute of Systems and Computers, Technology and Science Engineering and has Metro do Porto as a partner.

7) The project “Modeling and prediction of road accidents in the district of Setúbal” is developed by the University of Évora, in partnership with the Territorial Command of Setúbal of the National Republican Guard.

8) The project “IPSTERS – Land Recognition System of IPSentinel,” of the Institute of Development of New Technologies, has the partnership of the Directorate General of the Territory.

9) The project “Modeling the flow of students in the Portuguese education system,” developed by the Association for Research and Development of Sciences, has the partnership of the Directorate General of Statistics of Education and Science.

10) The project “Understanding the Determinants of Academic Performance: Evidence from the Portuguese Higher Education System,” from the Higher Institute of Statistics and Information Management, has as its partner the Directorate General of Statistics on Education and Science.

11) The project “iLU: Advanced Learning in Urban Data with Situational Context to Optimize Mobility in Cities” is the responsibility of the Institute of Systems and Computer Engineering, Research and Development in Lisbon and has as its partner the Lisbon City Council.

12) The EPISA-Entity and Property Inference for Semantic Archive project of the Institute of Systems and Computers Engineering, Technology and Science has the partnership of the General Direction of Books, Archives and Libraries.

13) The project “Detection of patterns of addition in online play” is developed by the Higher Institute of Statistics and Information Management and has the partnership of Turismo de Portugal.

14) The project “ICDS4IM – Intelligent Support to Clinical Decision in Intensive Medicine,” is developed by the University of Minho and has as partner the Centro Hospital do Porto.

15) The project “Preventing the risk of complications of surgical treatment and defining the prognosis in cancer patients through the integration of clinical and pathological data” is developed by the Institute of Mechanical Engineering in partnership with the Instituto Português de Oncologia do Porto Francisco Gentil.

In total, Portugal has 19 projects in the area of ​​artificial intelligence and data science, including the 15 new ones, according to Publico.

It was in 2017 that the Portuguese government started the initiative with four pilot projects, one of which was intended to detect long-term unemployment at an early stage.

By 2020 the objective is to finance at least 30 initiatives with €10 million. This year, the projects selected have been funded with €3.8 million by the Foundation for Science and Technology.