Portuguese educational toy startup Science4you announces its intention to launch an Initial Public Offering (IPO) on shares representing its capital and requests its admission to trade on Euronext.

“Our mission is to nurture the dream and reinforce the knowledge of millions of children around the world.”

The transaction is part of the deliberations taken by the Shareholders’ General Meeting of Science4you, which was held on Wednesday, November 7, 2018, and it aims to provide the company with a more diversified financing structure that will be adequate to the continuation of its expansion and creation of value for its shareholders.

The IPO is still subject to the necessary approvals, namely approval by the Securities Market Commission and favorable market conditions. 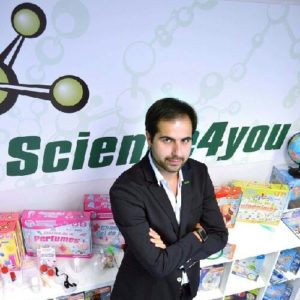 “Our mission is to nurture the dream and reinforce the knowledge of millions of children around the world,” said Science4you CEO Miguel Pina Martins, in a statement.

“This operation will allow us to continue this mission, making our brand stronger, more recognized and capable of continuing to innovate in this important global industry,” he added.

The IPO is expected to include the issue of new shares by Science4you, amounting to approximately €8.25 million, and a partial sale of existing shares held by the company’s current shareholders.

“This operation will also give the company greater visibility and credibility in an important phase of internationalization, along with being an important milestone and a new stage for the company 10 years after its launch,” said Martins.

Martins started Science4you when he was 22-years-old as his final degree project. He invested €1,125 back in 2008 and ten years after its creation as a startup, Science4you is today an important group in the toy market in Portugal, with a consolidated sales volume of more than €20 million.

It is expected that the IPO will consist of a capital increase and a share sale component of the company’s current shareholders, up to a total amount of €15 million, which is equivalent to a percentage of capital to be dispersed of up to 45% of the share capital.

The company has among its main investors the Millennium Venture Capital Fund, Portugal Ventures and the European Investment Bank.

Science4you regularly exports to more than 60 countries and has a line of more than 500 scientific and educational toys.

In 2018 Science4you was among the top 10 Portuguese startups most referenced by the media, coming in at number 5.

Read More: Top 10 Portuguese startups with the most media mentions in 2018

Earlier this year, Portuguese fintech startup Raize (another startup with the most media mentions) successfully launched its own IPO, attracting €5.5 million from over 1,400 investors.

As of November, 2017 the Portuguese fintech startup, was managing the largest national SME loan portfolio, with more than 14,000 investors in a total of more than 500 market operations, and it had already provided more than €10 million in helping companies to invest and strengthen their treasury.