Web summit founder Paddy Cosgrave removes the controversial French right-wing politician Marine Le Pen from the list of speakers for the 2018 event in Lisbon after strong international protest, he announced on Twitter.

The decision to disinvite Marine Le Pen came as a surprise, after founder Paddy Cosgrave had less than 24 hours before issued a statement defending his invitation to the French politician.

The Web Summit claims to be the ‘world’s largest tech conference’ and will be held from November 5-8 in Lisbon.

The incident surrounding the invitation to Marine Le Pen has kicked off a heated discussion about what some see as promoting healthy political debate, while others fear giving a platform and media coverage for ‘fascist’ political views.

Marine Le Pen has been repeatedly generating controversies through a far-right discourse especially towards immigration and Islam, which critics judge as both populist and racist.

Her name on the list of speakers for this year’s Web Summit was close to generating an international diplomatic incident.

Several anti-racism organizations and left-wing political associations from both countries asked the Portuguese government and the Mayor of Lisbon to take a stand.

“It is unacceptable that public money will be used to give Marine Le Pen a platform to convey messages of xenophobia and racism,” the Portuguese left is quoted in French media.

A petition against the arrival of Marine Le Pen, launched shortly after by a French entrepreneur, quickly reached more than 700 people.

Less then a day earlier, Web Summit founder Paddy Cosgrave had issues a long statement defending Ms. Le Pen’s invitation through his belief in open political debate and discussion, even with views he stressed not to share.

“Banning or attempting to ignore these views is unlikely to help address the roots of the rise in support for these views across parts of Europe in particular”, Cosgrave writes.

The incident is not the first time the Web Summit has turned into a heated political arena.

Alongside then-president Francois Hollande and Parisian mayor Anne Hidalgo from the Socialist party in France, right-wing Brexit leader Nigel Farage was on the list of the 2017 invitees to the tech conference.

The issues of hate and freedom of expression in relation to platform technologies will be a key “defining question of 2018”, Cosgrave added on Twitter after the surprise renouncement of Le Pen’s invitation. 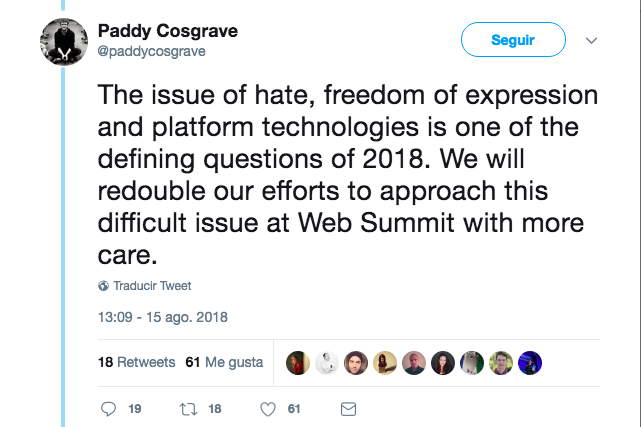 Apart from this controversial theme, gender diversity, especially women in tech, will continue to play a key role in 2018.

Earlier this year, Web Summit had renewed its partnership with Booking.com to promote gender equality through the Women in Tech mentor program to continue efforts in driving gender diversity.

The tech conference started in Ireland in 2009 with fewer than 400 attendees, before being moved in 2016 to Lisbon. Organizers of this year’s Web Summit expect to attract about 70,000 attendees in November.

Among the speakers will be high-ranking tech names such as Evan Williams and Ben Silverman, founders of Twitter and Pinterest, and the CEOs and Presidents of tech giants Samsung (Young Son), Microsoft (Brad Smith) and eBay (Devin Wenig).

However, the list also surprises with names such as footballer Ronaldinho, Game of Thrones star Maisie Williams, or electronic music band Major Lazer, expected alongside the rank-and-file of major multinationals or a representative from the Vatican.

From the political field, invitees include Margarethe Vestager, the EU Commissioner for Competition famous for imposing fines of several billion Euro on tech giants Apple and Google.