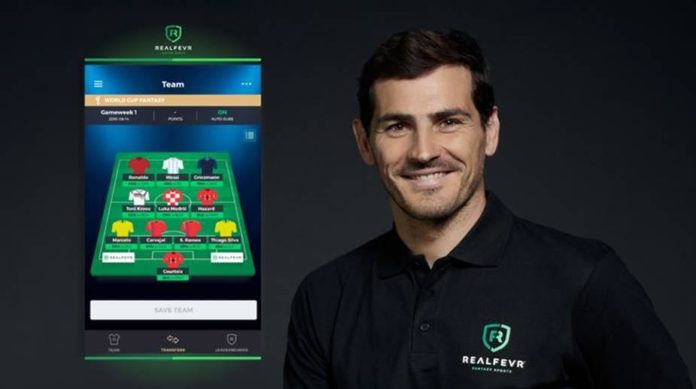 RealFevr, the Lisbon-based startup responsible for the largest fantasy sports platform in Portugal, continues its expansion and now presents Iker Casillas as a global ambassador of its brand.

“I’m curious about these types of platforms, and I’ve been getting to know some of them,” said Casillas in a statement to the press.

“RealFevr has a vision for the future that others do not have. I believe that the technology it is developing and the commitment with which it works explains the success of this platform and so I face it with great pride,” the 2010 world champion footballer added.

Despite not being an expert in fantasy sports, Casillas is betting on a team that knows how to win.

“Obviously I could only choose my previous club, Real Madrid. I trained there and, therefore, I choose the 11 of Real Madrid. Easy…” the Spanish goalkeeper said.

RealFevr is an international Fantasy Leagues platform that currently has more than 500,000 users spread around the world, with a greater impact in Europe and Latin America.

“Casillas was our first and only choice to represent RealFevr at a global level because he is a transversal, universal figure who has a great ambition and an enormous desire to conquer all that he proposes,” said André Viana, Co-Owner & Executive Chairman of RealFevr.

“RealFevr’s mission has always been to create the best and most exciting Fantasy experience in the world. We have just launched a new image, new features, and continue to surprise the market, now with the ‘hiring’ of Iker Casillas, an icon that fully shares the values ​​of the brand,” he added.

RealFevr’s secret of success lies in the gameplay and world-wide betting, since the platform allows anyone, anywhere in the world, to wear the skin of a football coach and play in various leagues. At this moment, it is possible to form teams and challenge other players in the Spanish, Portuguese, Brazilian, Champions League, Copa Libertadores, Europa League and recently in the biggest competition of all: the World Cup.

“There are several things that distinguish us from other Fantasy Leagues, for everything the world. One of them is our strong bet on technological innovation. We want our games to be ever more appealing and appealing to our users,” said Viana.

The idea behind the Portuguese fantasy sports startup was to create a free, attractive, competitive, compelling global platform, and above all, a new way of living, feeling, and perceiving sports.

The solution was, “To create a game based on real statistics, with the possibility of making substitutions before and during games and to see the scores in real time,” explained CEO and Co-Founder Tiago Dias.

“It is a platform with a 100% analytical and free game that brings people closer to the real game.”