First study on Portuguese scale-ups by SEP and Microsoft

Over the last years, a lot has been done and said about startups. This new wave of tech entrepreneurs took Portugal by storm and today it’s impossible not to admire how much we have accomplished as a country. But this is just the beginning. What Portugal and Europe now want is to transform as many startups as possible into scale-ups. If you are wondering what scale-ups are, we can tell you that according to the Startup Europe Partnership, these are startups that have raised more than a million euros and are creating a considerable number of jobs.

To raise the discussion on this topic, today Startup Europe Partnership together with Microsoft Portugal and Ativar Portugal Startups is launching the first study on Portuguese scale-ups with surprising results.

First, they have identified 40 scale-ups that raised more the 150 million euros. When comparing this results with Germany or the UK the number seems low, but if you look at how recent our ecosystem is, this number is pretty impressive. 65% of the portuguese scale-ups have only raised money in the last two years and 75% of them were born after 2010. This is a strong indicator of how fast the Portuguese ecosystem has evolved in the past 5 years.

For Alberto Onetti, the Startup Europe Partnership coordinator, Portugal has what is takes to produce a considerable number of scale-ups in the coming years:

We were in Lisbon in June for the SEP Matching Event and we found a vibrant community of entrepreneurs. It’s no surprise that Lisbon was the chosen one to host the Web Summit 2016. The good news is that this young ecosystem is already producing tangible results.

SEE ALSO: The decision was made: Web Summit is coming to Lisbon!

The Portuguese scale-ups identified by the study are mainly focused on three areas: Software Solutions, Business Analytics and Health, and a large number of them chose to relocate their headquarters either to the US or England as a way to be closer to bigger markets and financing.

Where Portugal needs to do much better is in the number of exits. Since 2010, only 9 acquisitions happened (digisfera, BestTables, FLIPSIDE, anubisnetworks, FiberSensing, webdetails, tarpipe, FixeAds and blip). Well-know companies like Google, TripAdvisor or BetFair already did some “shopping” in here, but Portugal is only now becoming known by the quality of the technology produced and by the talent available. 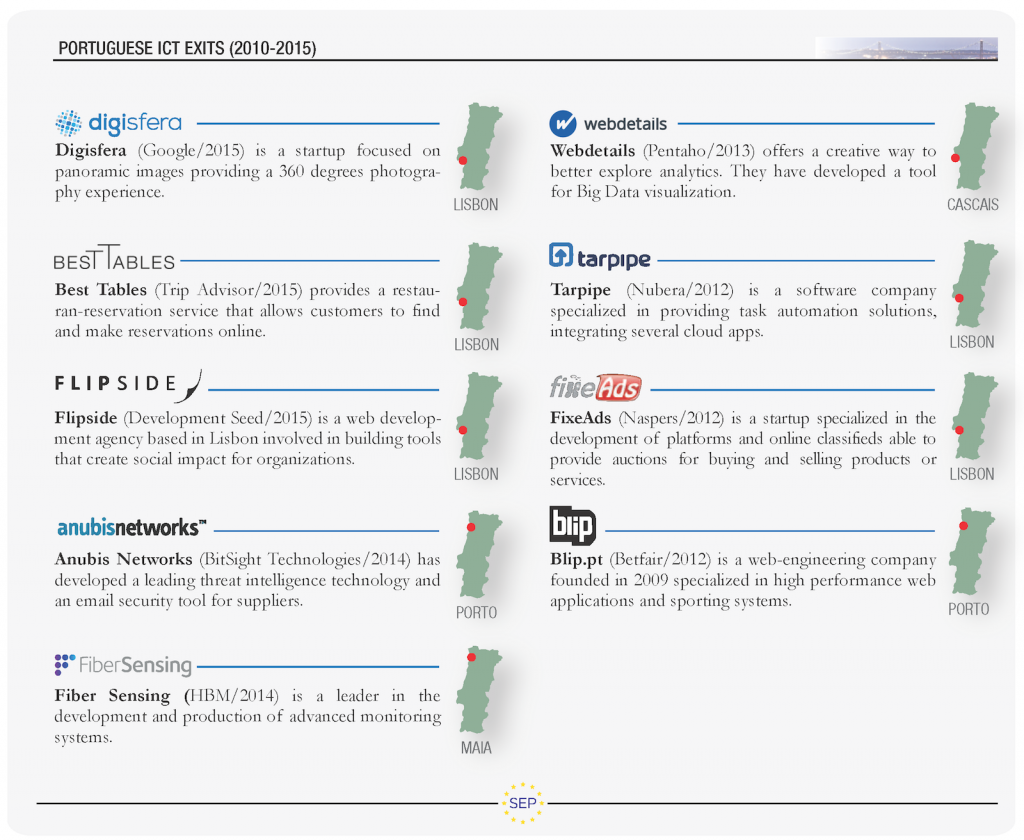 If doubts existed, this study shows that the Portuguese startup ecosystem has a sustainable future. For Caroline Phillips, Director Developer Experience, Evangelism & Entrepreneurship at Microsoft Portugal:

To support startups today is to invest in the Portugal of tomorrow and this study is confirming something that Microsoft knows well: the Portuguese scale-ups are becoming companies capable of competing on a global scale and contributing to the economic growth of the country.

As a final note, the study also mentions that Portugal hasn’t produced yet a so-called Unicorn (billion dollar company), but it’s undeniable that Farfetch, the London-based luxury fashion website, has Portuguese DNA.

Today, together with Microsoft Portugal we will be distributing the printed report at the UP AWARDS Gala.