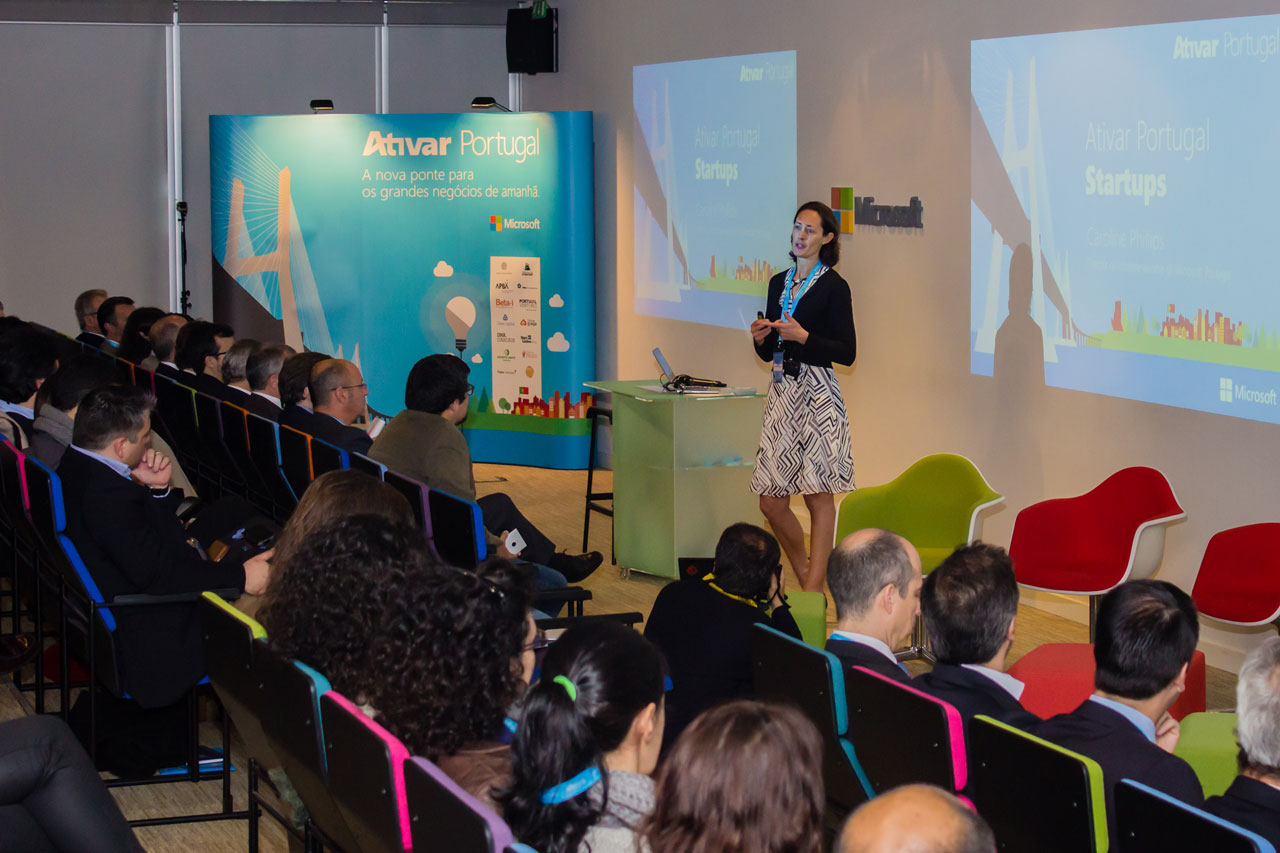 PortugalStartups.com is at the launching event of the Ativar Portugal Startups program, at Microsoft Portugal.  And it is not disappointing! Much more will happen during the afternoon, but we already want to show you the highlights!

What is Ativar Portugal?

Ativar Portugal is a Microsoft’s initiative that intends to support the economic growth and job creation, exploring the potential of the technological ecosystem. After concluding the first stage of the project, Microsoft is now focusing on the Portuguese technological startups.

This second stage was designed to support entrepreneurs and startups, helping them to build world-class businesses in partnership with a rich and diverse startup ecosystem of accelerators, incubators, venture capitalists and business angels.

What happened during the morning

The keynote speaker João Couto, General Director of Microsoft Portugal, is certain that the program will have a huge impact on the Portuguese ecosystem:

"Our goal is now to help create 50.000 startups per year in Portugal instead of 35.000" João Couto, General Director at @PTMicrosoft

Caroline Phillips, Director of Entrepreneurship at Microsoft Portugal, explained that the Ativar Portugal Startup program, which mission is “bringing together the best of the best to help Portuguese Startups build successful, world–class businesses in the future”. The program is divided in four pillars: tools, people, business and spotlight, and the initiatives that will be held are displayed on a website. A new video was also launched to promote the project:

The roundtable entitled “The Future of Entrepreneurship in Portugal”, moderated by Nicolau Santos, Director-Adjunto at Grupo Impresa – Jornal Expresso, and composed by Carlos Silva from Seedrs, Inês Silva from Startup Pirates, João Vasconcelos from Startup Lisboa, Carlos Oliveira from Startup Braga, José de Franca from Portugal Ventures and José Vital Morgado from AICEP presented some advice to all the entrepreneurs, and focused on key themes such as exits, investment and education. Questions like “Why aren’t there more exits?”, “How can a startup go global?”, and “Are the universities doing enough to foster entrepreneurship?” were certainly answered by the panel.

For José da Franca, before talking about an exit, we have to consider that startups go through a lot of investment rounds and that Portugal cannot support the amount of money needed for that. So what is the solution? Have lower expectations? No, it is to keep the ambition and the investment on the Portuguese startups, preparing them for future investment rounds on an international level. Investors are looking for Portuguese companies global by design, that address global problems, work on relevant markets or have the right team.

"We don't have capital to support at the level of our ambition; we are getting it from outside" José da Franca @PortugalVenture #AtivarPT

Carlos Oliveira believes that two different actions should be taken: it is necessary to create more new companies (even if only a small percentage will actually be successful) and to make the existing ones having much more impact in the economy.

João Vasconcelos stated the major differences between digital entrepreneurship and other types:

"It's the first time in the history that you can create a company immediately international" @joaostartuplx, @STARTUPLISBOA #AtivarPT

Portugal 2020 was mentioned by José Vital Morgado as one of the tools available to support companies and the growth of the economy and international competitiveness.

Carlos Silva and Inês Silva agreed that universities have come a long way when it comes to entrepreneurship. Some are now working on it directly, others are supporting organizations indirectly.

Next, following the theme “What is needed to start successful businesses?” Rui Pereira, Co-founder at OutSystems and Cipriano Sousa, CTO at Farfetch talked about their businesses, the challenges they faced and the plans for the future.

What is still going to happen?

During the rest of the afternoon all the attendees will have the opportunity to expand their knowledge regarding entrepreneurship and startups in different sessions. The workshops and talks will be held by Universidade Nova de Lisboa, Microsoft Portugal, Programa Mais, Startup Pirates, Informa DB, ISOBAR, Beta-i and Fábrica de Startups.