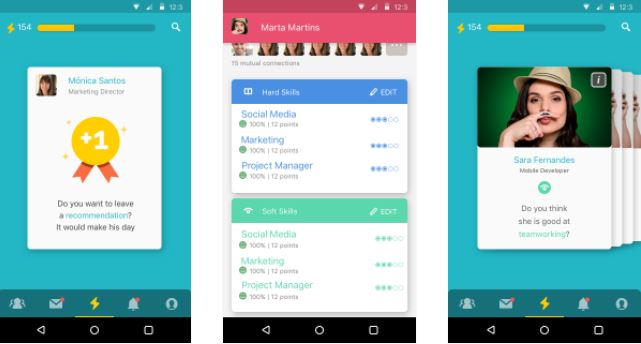 With the belief that people need a good balance between friends, family and work life, the Powerupp social networking app was launched to discover and empower people in your professional network.

The app, which was officially announced in London, was designed to help users manage and stay in touch with the “three pillars” of their lives — friends, family, and work.

“What exists today in terms of social networking in the corporate world is a hub of vanities where all people hold high positions,” said Co-Founder, Ricardo Paiágua, at the time of the launch.

“The ease of getting endorsements makes people’s profiles turn out to be little relevant to anyone looking for talent,” he added.

Powerupp can be described as a LinkedIn meets Tinder type of app. Users can recommend and evaluate the capabilities of those on their network, similar to LinkedIn but anonymously.

And similar to Tinder, they can also swipe swipe up for Yes or swipe down for No when choosing to connect, discover, or empower people in their professional network.

The Powerupp app is available on iOS and Android.

“We believe in a world built on fairness, honesty and transparency values. So we developed and app that lets you build a network and improve your career in a community where no one will endorse you on a skill you don’t have, just so you endorse them back on a skill they are not good at,” says the team on the app store.

“Positive feedback will grant you empowerment and level you up the ranks of your professional skills. This means that working hard will get you noticed, and put you up as an influencer and opinion leader.”

The Portuguese startup traveled to London, England to launch the new PowerUpp application campaign, a social networking business with the (real) user’s assets as a professional and as a person.