Muzzley, one app to rule them all

Imagine this: it’s Monday morning (because those are the hardest) and you have a million things to do before leaving home. You have no time to make the very much needed cup of coffee. All grumpy with no caffeine, you leave the house in a rush. Sitting in your car, your phone beeps. Cute Muzzley app notifies you about thermostat and lights you left on in the living room. But nothing to worry about. Thanks to Muzzley, you can switch it all off from anywhere. 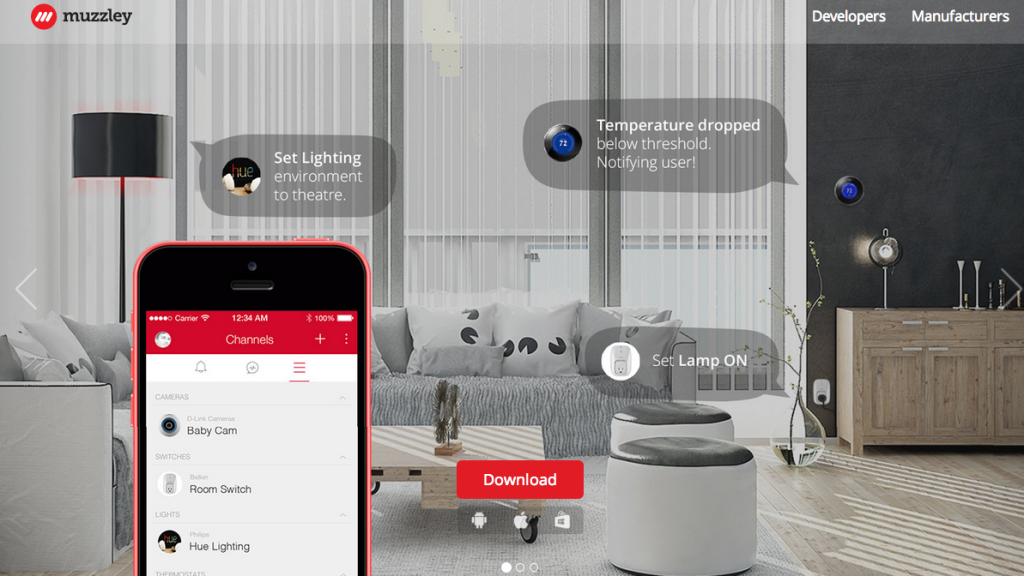 Connecting all smart devices in one intelligent application, Muzzley will make your life much easier and more fun.

So, how does Muzzley work?

Muzzley wants you to live more your house, rather than live for it.

All your smart devices, from TV to tracking device for your beloved pet, are connected in one common interface. Hard working ’Muzzley-ers’ embed compatible devices with an intelligent algorithm that allows it to be very intuitive.

The winner of Prémios Novos 2013 Award aims to free you from confining rules: “Muzzley wants you to live more your house, rather than live for it.“ With Muzzley, the house adapts to you and to your patterns. Do you want the coffee to be ready everyday at 8AM? Not a problem – “Not only we want to provide the users with the possibility of interacting with their connected devices through one single mobile app, but also we want the house to be smart enough to adapt to their habits and patterns“ Inês Raimundo , Marketing & Partnership Manager says.

However, we all know the stories where technology took over. But there is no need for you to be concerned, Muzzley doesn’t do anything you don’t wish to do. This intelligent application follows your habits and location and after sometime it comes up with suggestions based on the observation. The decision to proceed is yours. So, no worries, no “I Robot” scenario is going to happen, with this home automation app.

Not only we want to provide the users with the possibility of interacting with their connected devices through one single mobile app, but also we want the house to be smart enough to adapt to their habits and patterns

Even though Muzzley is focused on home automation, it was not like that since the very beginning. Before Eduardo and Domingos created Muzzley, there were a few attempts to start a business. None of them seemed exciting enough. One day, while playing a game, they wished their phones could be the remote control for computer games. And that is where the idea was born. In 2011, Eduardo Pinheiro and Domingos Bruges went to Silicon Valley. In the most vibrant hub in the world, the founders of Muzzley got interesting insights and decided to create Muzzley: a software which allowed you to control everything from everywhere.

Officially founded in 2012, Muzzley has raised $2 Million from Portugal Ventures, Plug and Play Ventures and seed investors. After another trip to Silicon Valley, 2 years later, Muzzley’s founders decided to change the direction a bit. In 2013 Muzzley shifted from a joystick to home automation.

The quickly evolving startup is currently based in two cities: Lisbon and Silicon Valley. The engineering team in Lisbon is developing all kinds of features to simplify your life. On the other side of the Atlantic, Inês Raimundo and Eduardo Pinheiro are working hard on business development and marketing. The team, with currently 20 members, is driven by what they do and they believe in the product. Planning to grow even more, Muzzley is looking for talents to join their developing team in Lisbon. Are you up for the challenge?

And if you are a startup developing smart devices Muzzley should know about, let them know. They always look for future stars to partner up with.

If Muzzley decided to partner with you and integrate your device with their app, expect a rapid and costless process

What else is cool about this fresh start up?

Muzzley is integrated into Intel’s Galileo board. What does it mean? That you can easily control RGB LED strip with your smart phone through the cloud.

I mean, how cool is that?

Or do you wish to set the environment of your living room to chill out? With Muzzley and Philips Hue, you can experiment with all kinds of settings. And those are only two of many features. 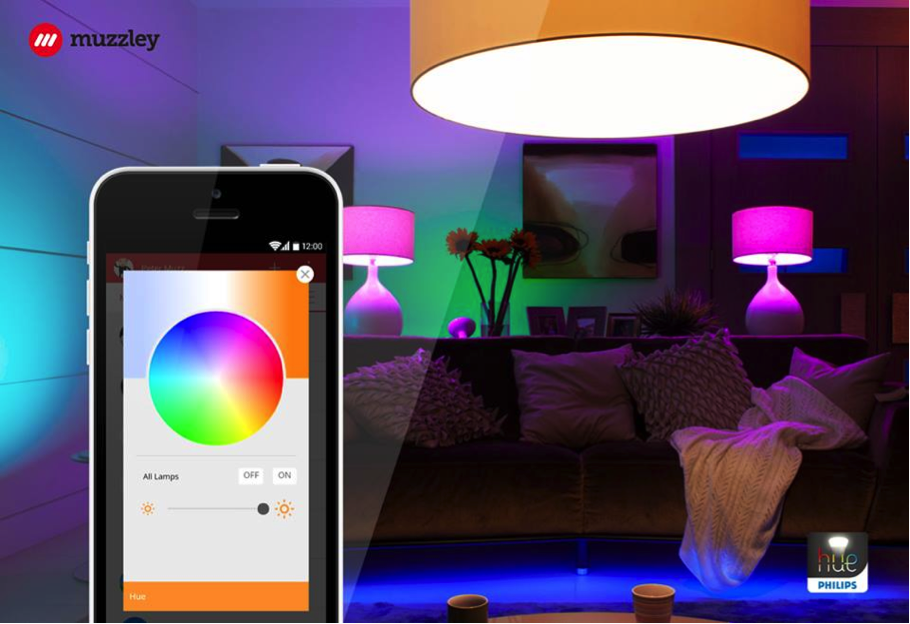 Sounds tempting? Then go ahead and download it. You can find Muzzley in 3 major iOS stores and all free of charge.

Inês shares their ultimate goal: “We would like to be the preferred mobile app for interacting with connected devices.“

And we see no reason why it would be impossible for Muzzley to reach this goal. With their re-formulated business model, everything can happen.

What happens in Vegas, stays in Vegas, right? But not in the case of CES 2015, where Muzzley will be ready to release their intelligence feature. So, come around to their exhibiting stand, interact with their devices live and talk to the people behind Muzzley. They have a lot to share.

And now, put the phone down and enjoy your life. Worry-free, because Muzzley will take care of your home.