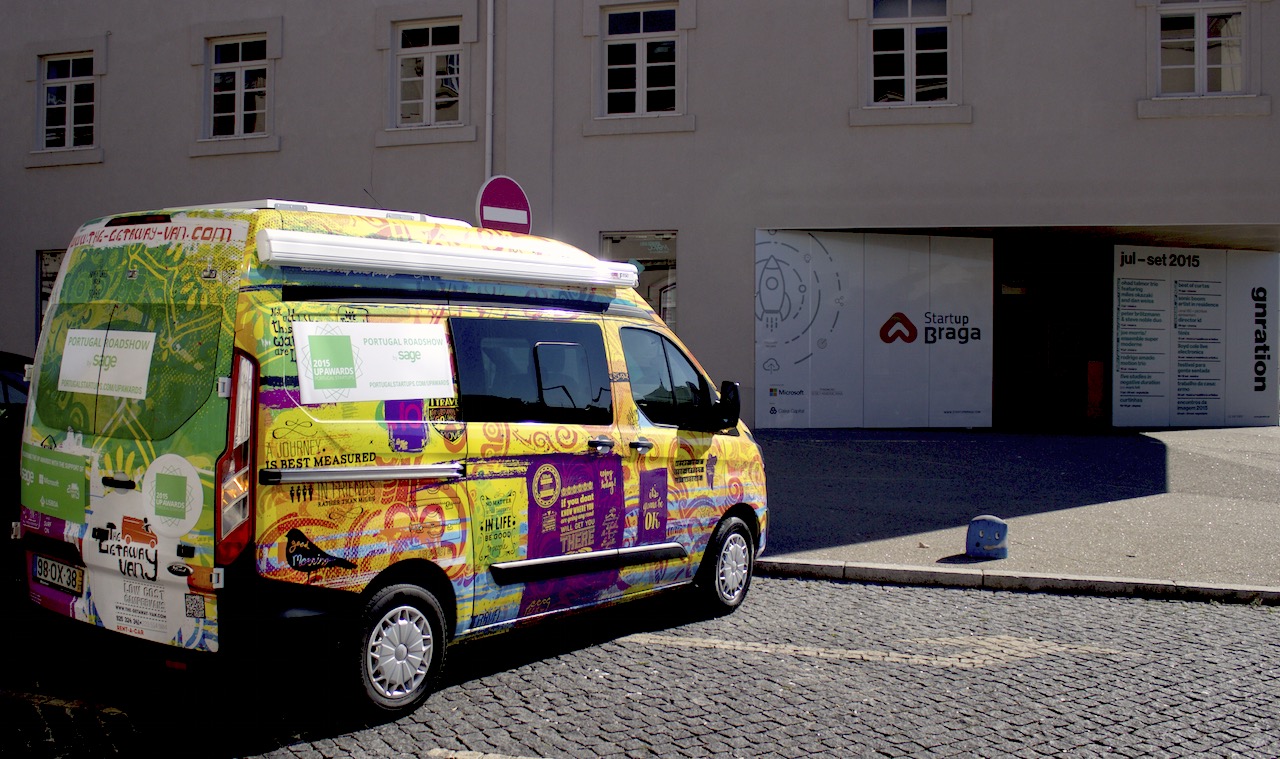 To visit 14 cities in 5 days – this is the goal of the UPAwards Roadshow by Sage. We want to know what is being done across the country and let the world know about it.

We got to our first stop, Braga, in the coolest Getaway Van. Startup Braga received us and we had the pleasure to get to know a little more about the evolution of the local ecosystem.

A city of traditions and historical heritage, Braga is also a city of secular entrepreneurship. Alexandre Mendes, who is deeply involved in the local community, told us about the development of curious ancient clusters in the city, such as scales and weighing, textile and furniture.

The foundation of the Minho University was the reason that made the city capture and retain talent, which is essential to create an ecosystem. It brought to the city new companies in the software arena. From this, entrepreneurs like António Murta and Carlos Oliveira became pioneer entrepreneurs in the national panorama.

When the economic crisis arrived, many talented people were without options to show the value to their skills. That’s when Factory Braga appeared. Factory Braga would be more than a coworking space, it had the goal of connecting the people and the existing initiatives in the city, getting to the creation of a living and cooperating ecosystem. But whilst this was an informal and unstructured project, Startup Braga, a more recent initiative, was created with a very objective goal and a structured strategy to achieve it.

In fact, the project connects perfectly the decision-making power to operational capacity. The goal is clear: to enhance and potentiate the startups and the entrepreneurs. The results have been catching one’s attention, what can be seen by the number of startups created and supported, the investment they raised or by the number of applications to their acceleration programs.

Other metrics have been more overlooked. Many big corporations are thinking about returning and rehabilitate their offices in the city – like Wedo, Outsystems and Bosch.

For the future, the biggest challenge Braga faces is the war for talent and the competition with bigger cities. For now, it seems to have retained these talented startups that pitched during our meetup:

3D orthopedic surgical planning tools. This technology helps the orthopedic surgeon to intuitively and freely manipulate a 3D model created through the imaging study of the patient. More than 100 physicians spread across the world are now using the tool and providing precious feedback for improvement.

Inspired by electronic music, Imaginando is a tech startup with a strong foundation on electronic arts. Their mission is to create products around what they love most: graphics, music and technology.

A cloud service that unites nutritionists and their patients, providing the possibility to monitor the efforts, creating meal plans and supporting the adoption of new ones through the analysis of the statistical profile.

The beta version is available and their blog will be launched in a few days.

PepFeed is the ultimate online shopping assistant for all things tech. When browsing a product, you’ll get instant access to top deals, videos and reviews.

The mobile app will be available by the end of this month. Know more at beta.pepfeed.com.

Real time mental fatigue monitoring system that’s non-invasive and non-intrusive to the user. PerforMetric aims at detecting fatigue behaviors using this information to improve the quality of life and mental health of the user. Now working in a B2B model, it allows the improvement of individual performance and productivity on companies and organizations.

Sage is offering a 6 month trial subscription for Sage One + 50% discount forever (Standard version) for the best pitch in each city. And the winner in Braga is… Peekmed!

Later we’ll reveal the daily winner, that will receive 1 month of advertizing on PortugalStartups.com.

If you want to be part of the Braga community, you have now the opportunity of joining Startup Braga’s first pre-acceleration program, applications are now open. This is an opportunity for early stage startups to take the first steps on their idea development.

Publicize launches Swap Shop, a free-to-use online marketplace for entrepreneurs and startups in times of constraints